Home » Stories » The Great British geography of Internet use and engagement

The Great British geography of Internet use and engagement

The 2018 Internet User Classification (IUC) offers 10 unique classes of Internet Use and Engagement. It was developed as an update to the previous (2014) IUC, but introduces an updated methodology and more comprehensive data, built from a range of consumer, survey and open data collected by the CDRC.

Now, why might online behaviour vary? For the most part, demographic factors play the most important influence upon online engagement, such as population age or ethnicity.

Engagement can also be by influenced by where we live. Location can, for example, impact how fast the Internet is and in rural areas it is often the case that the Internet can be slower, either because houses are often further away from their local telephone exchange or mobile broadband signal strength can be weaker. This can also influence a person’s online behaviour. 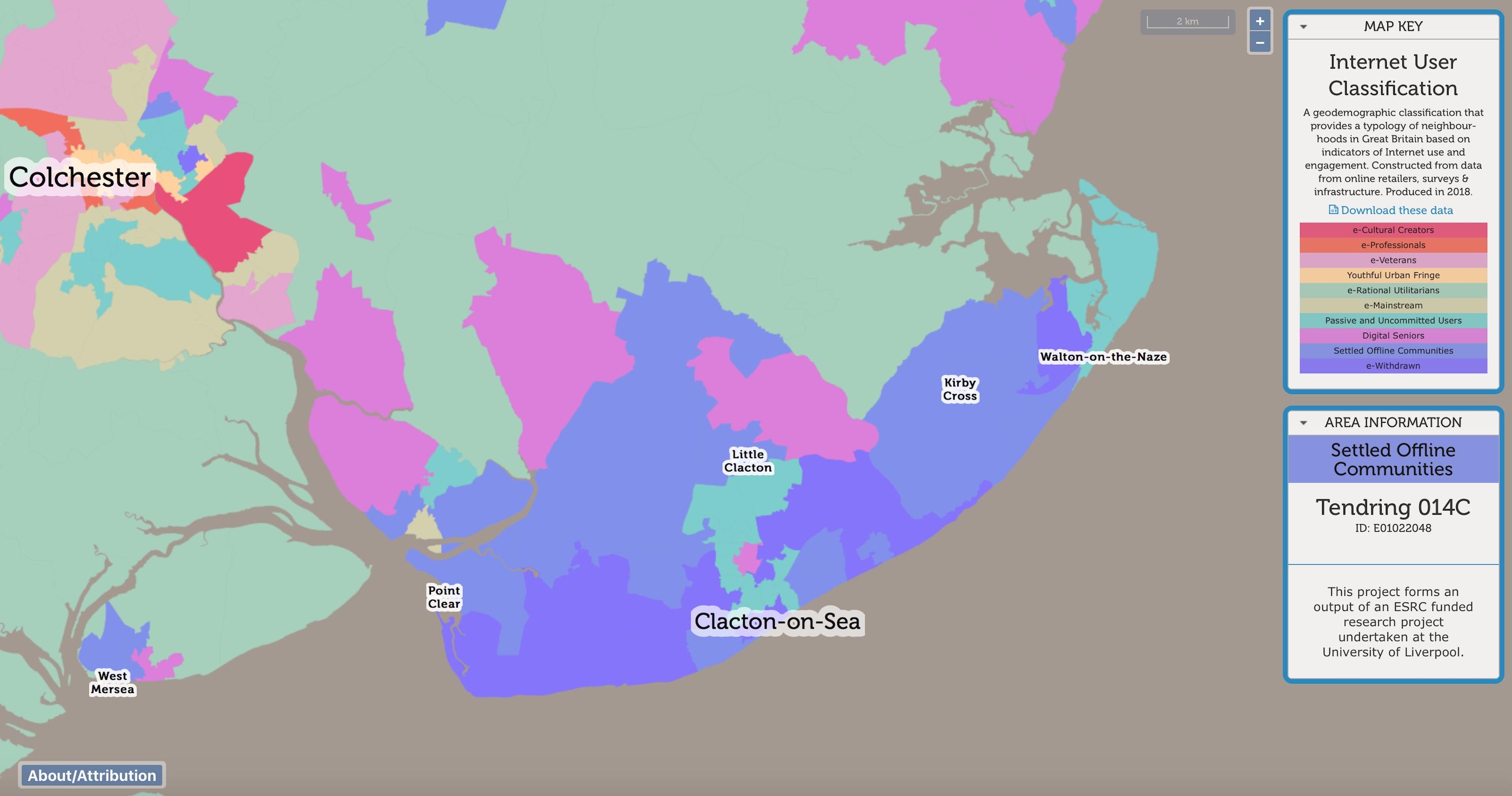 Within rural areas, the most common group is the “e-Rational Utilitarians”. These residents more prevalently use the Internet for service applications such as e-banking and online shopping, rather than entertainment and communication. This may be as a result of these areas having constrained Internet speeds which limits use of those websites or services requiring faster connections.

In some places, even though the infrastructure is adequate, residents do not generally see the necessity of the Internet. Many of these areas are found in seaside locations around the British coast. An example includes the town Clacton-on-Sea which is located in the South East of England, where the majority of the area is classified into the Groups “Settled Offline Communities” or “e-Withdrawn”. These Groups contain populations who are some of the least engaged with the Internet. 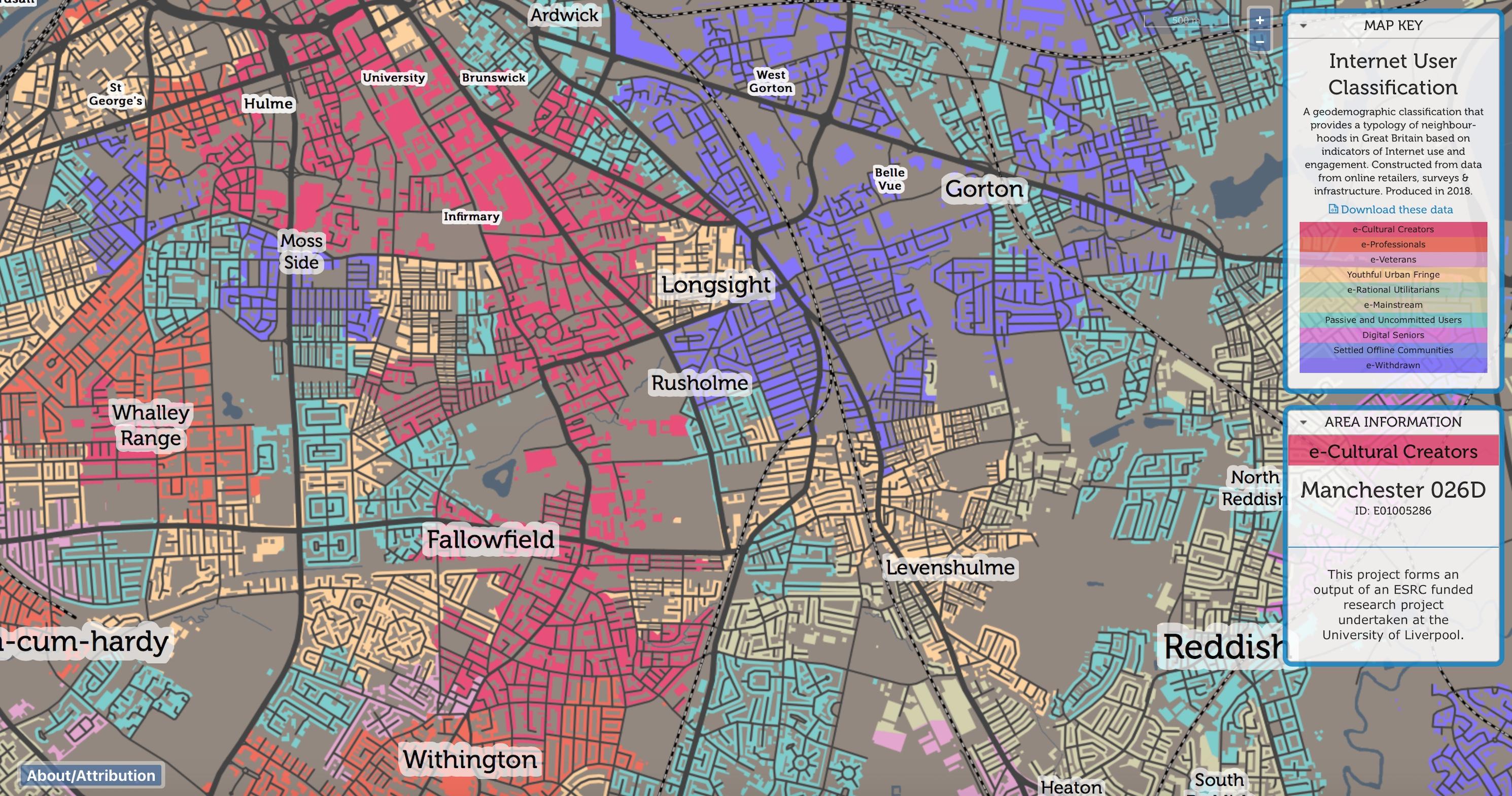 Another driver of Internet engagement relates to demography. Naturally, we tend to find that younger populations are more engaged than those who are elderly. For instance, if we look at Greater Manchester in the North West of England, which is a popular area for student housing given the large number of universities within the city, many student houses buffer the arterial road running South from the University to the suburb of Fallowfield. The dominant Group that characterises these neighbourhoods is “e-Cultural Creators”. These areas usually contain a young population who engage with the Internet in a variate of ways, particularly for use of social networks and accessing through mobile phones. However, this is not always the case. Just to the East of these highly-engaged students is another area called Longsight, where although the population is also young, they are much less committed users, despite being in such close proximity. 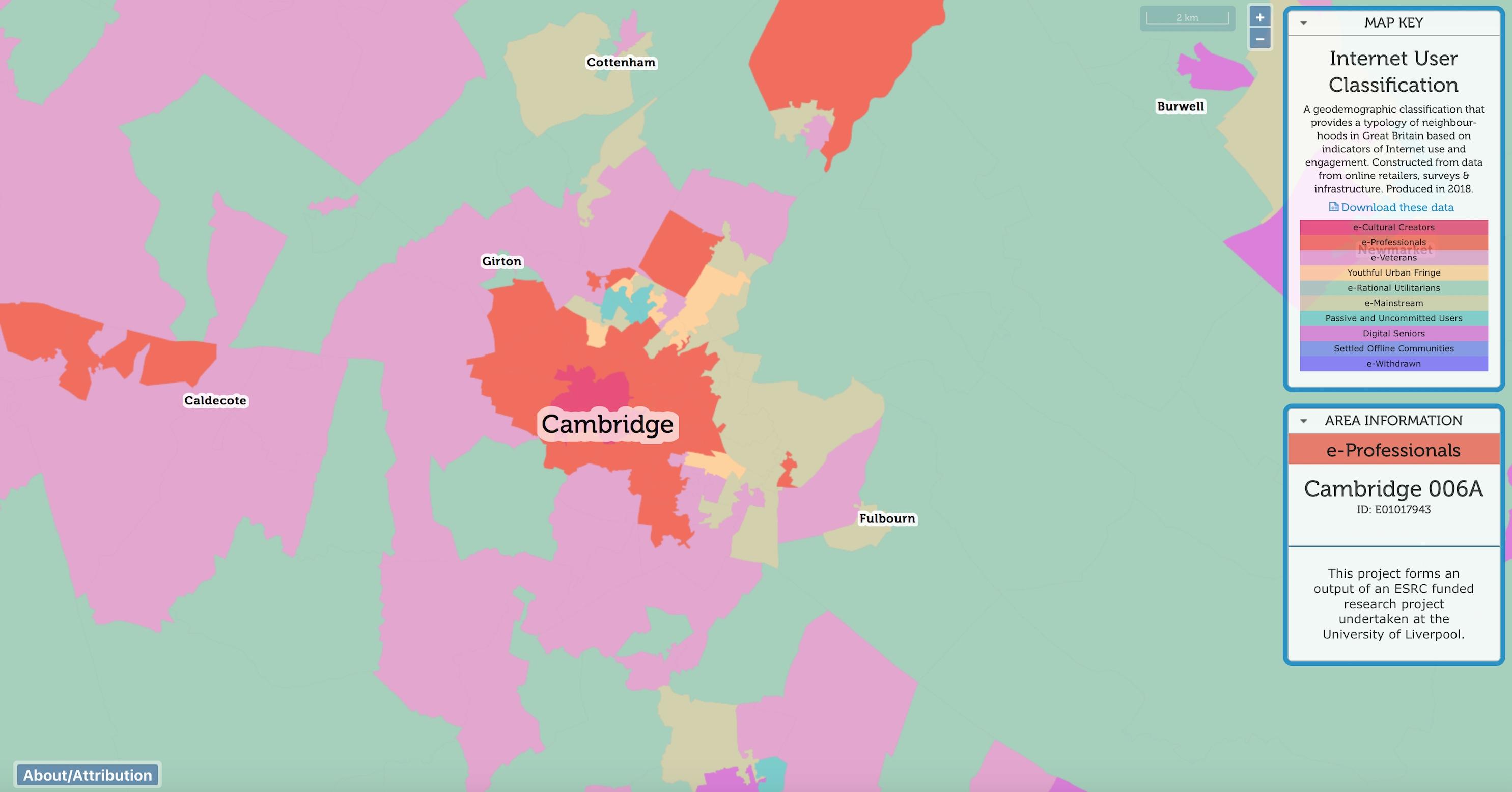 The socio-economic characteristics of individuals, such as their education and income, also play an important role in engagement patterns. Cambridge is a good example on how patterns of engagement often coalesce with high-income areas, where high-tech businesses and technology incubators have developed around the city. The core of this city houses a high concentration of students (commonly characterised by the “e-Cultural Creators” group), and expanding outwards with “e-Professionals” and “e-Veterans” Groups dominant in the periphery and outer suburbs, which both represent highly-engaged but more mature populations of Internet users. 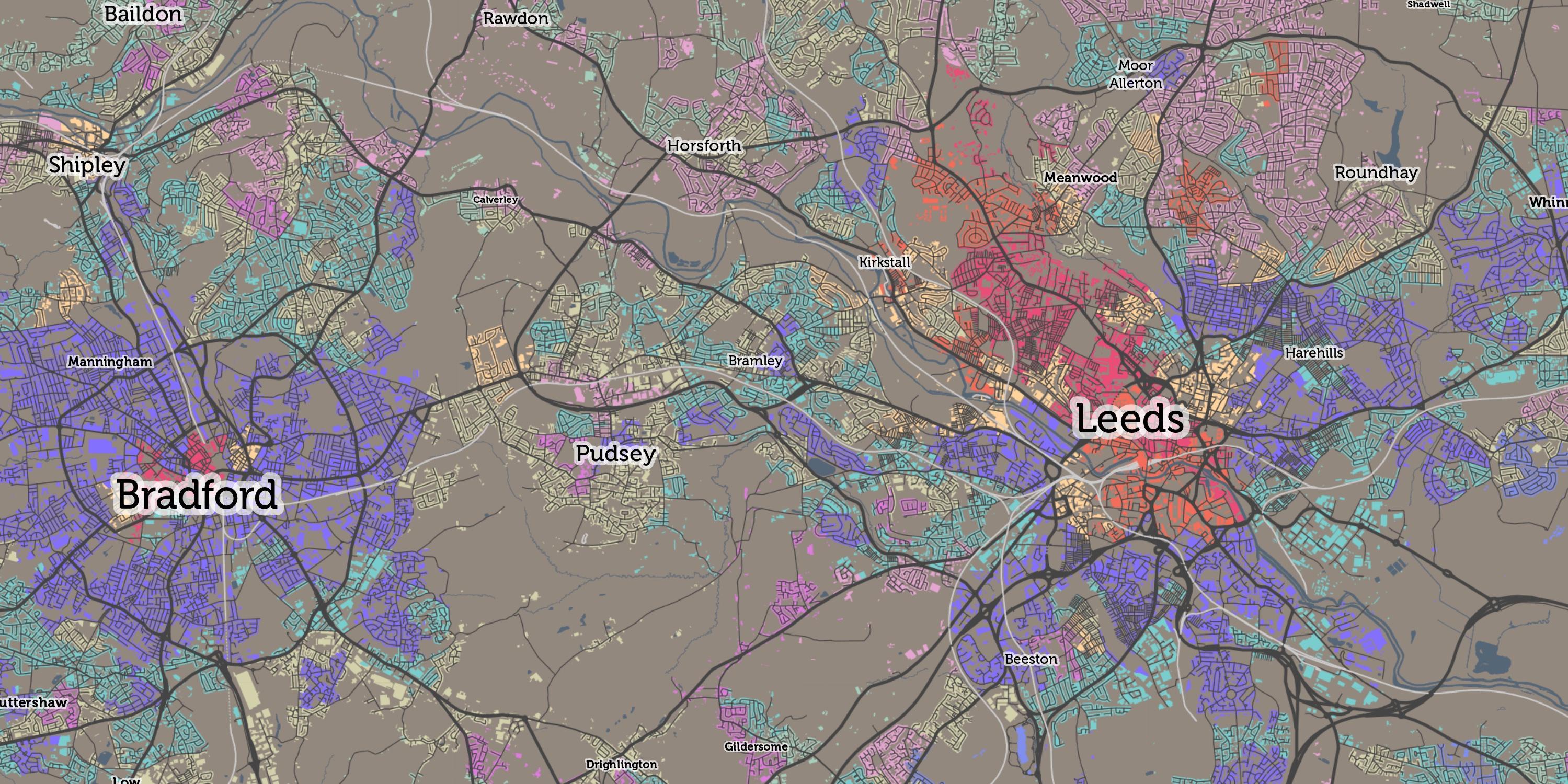 However, there are IUC Groups that are barely visible in the South but much more pronounced in the North; for instance, Leeds and Bradford. While high engagement levels within urban cores is generally ubiquitous in GB, the periphery of these city centres express a completely different pattern to many others, with a number of areas that can be relatively characterised as unengaged.

The IUC offers a unique insight into the geography of Internet use and engagement across Great Britain. Engagement with the Internet has an obvious impact on consumer behaviour, such as the use of brick-and-mortar retail relative to online shopping. However, it also has an important influence on the take-up of digital services provided by the public sector. Understanding this geography is critically important to mitigate digital inequality, and products such as the IUC provide a means of targeting interventions necessary to ensure smooth transitions to digital service use at the local level.

Explore the full interactive map here.
Explore the rest of the indicators site here.
Our ‘Broadband Speed Map’ slots in nicely with this story. Read more about it here.